With a wall of red-orange flames rapidly advancing, and Notre Dame’s vast chambers reaching oven-like temperatures, the commander of the Paris fire brigade made a painful choice on Monday evening.

He told his firefighters to retreat.

Losing a beloved medieval relic would be devastating, of course, but losing human lives in a hopeless effort to save the building would be even worse.

But Jean-Claude Gallet, the commander, had a backup plan: Colossus, a 1,100-pound tank-like robot with the ability to venture into danger zones where conditions would quickly kill a person.

Using a motorised water cannon capable of firing more than 660 gallons per minute, Colossus took aim at the stone walls of the ancient cathedral and began spraying.

In an interview with The Times, Mr Gallet credited the fire-fighting robot with lowering temperatures inside the glass-filled nave and saving the lives of its human counterparts as an even greater disaster loomed.

“Time was against us, the wind was against us and we had to get the upper hand,” Gabriel Plus, a spokesman for the Paris fire brigade, told the paper.

“The priority we set was to save the two belfries. Imagine if the timber of the belfries had been weakened and the bells had collapsed. That was really our fear. In the beginning, it was not impossible to imagine that the cathedral structure could collapse.”

The machine’s heroic role in the Notre Dame fire may be remembered as the beginning of a new era of robotic firefighting.

Over the last decade or so, experts say, different countries and organisations have begun developing machines that fight fires and gather information, potentially offering a sophisticated new tool in a fire department’s arsenal.

The machines keep people out of harm’s way and provide an alternative to the age-old practice of hauling a heavy, unwieldy fire-hose into a cluttered building.

Colussus is far from the only robotic firefighter available for action.

In China, video has emerged of firefighting robots taking part in drills alongside human firefighters.

Howe and Howe Technologies – a company that specialises in creating military vehicles and robots – has developed several firefighting robots that are designed to operate in industrial environments using foam or water.

Lockheed Martin’s Fire Ox, a robotic fire truck that can be controlled using a “game style controller”, was designed to fight wildfires or structure fires, Myron Mills, who helped develop the vehicle, told Bloomberg in 2014.

The US Navy has also begun experimenting with a 5’10” humanoid robot to fight fires.

The Terminator-like machine was designed to throw propelled extinguishing agent (PEAT) grenades and handle a fire hose, according to CNN.

The Colossus robot is deployed “with the Paris Firefighter Brigade and other with many other French or foreign Regional Services of Fires & Rescues”, according to Shark Robotics, the French company that created the machine.

The robotics company’s website doesn’t reveal the robot’s price tag and the company didn’t respond to a request for comment.

Controlled using a joystick, the machine is waterproof, fireproof and can even withstand thermal radiation, according to the company. It can crawl up stairs.

The machine’s lithium ion batteries can last for up to eight hours, and the robot can be equipped with cameras, sensors and a smoke extracting fan.

Brian Lattimer, the vice president of research and development at the safety engineering and consulting firm Jensen Hughes, said operating in dangerous environments is only part of the appeal of firefighting robots.

In the near future, he said, robots will be equipped with sensors that allow them to see through heavy smoke and steam, locating obstacles and identifying “hot spots” that can be targeted with water.

Right now, he said, one of the downsides to robots is they operate best in open environments – like a warehouse or a spacious cathedral.

Over time, he said, the machines will be equipped with increasingly sophisticated artificial intelligence that will allow them to operate with more autonomy, presumably as the machines become more agile.

“The goal will be for firefighters to be in the loop with these robots to assist and evaluate the hazards so they can plan an effective response,” Mr Lattimer said.

“Eventually, we’ll have collaborative teams of robots – in the air and on the ground – that will work closely with people and reduce the risk to human life.” 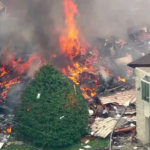 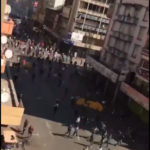