How bad are California’s extreme fires? A visual guide

How bad are California’s extreme fires? A visual guide

The Carr fire – one of multiple blazes throughout the state – has scorched more than 98,000 acres of land near the city of Redding, with more than 5,000 structures threatened.

Redding, 230 miles north of San Francisco, is among the hardest hit areas in the state. According to the latest tally it has seen 657 homes destroyed, the fire having consumed 149 square miles of ground. But the massive fire has slowed. “We’re feeling a lot more optimistic today as we’re starting to gain some ground rather than being in a defensive mode on this fire all the time,” said Bret Gouvea, incident commander for the California Department of Forestry and Fire Protection.

The Ferguson fire, which has burned close to 46,000 acres near Yosemite national park and killed one firefighter, prompted officials to close the most popular areas of the park, including the famous Yosemite valley, at the peak of tourist season. More than 3,800 fire personnel are working to protect the groves of ancient sequoias along the western edge of the park. 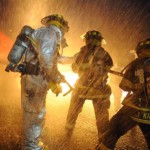 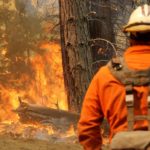