The Gugulethu fire station has been temporarily closed following an attack on firefighters on Thursday evening, the City of Cape Town’s safety and security department announced on Friday.

Firefighters were attacked after extinguishing a fire at nearby municipal offices.

It is believed that a car and a carport at the Fezeka municipal office, next to the fire station, were set alight.

“Firefighters extinguished the fire, but soon became targets themselves when the group started hurling stones at their building, causing damage to the bay doors,” said mayoral committee member for safety and security JP Smith.

The City’s chief fire officer has suspended operations at the Gugulethu fire station as a result.

Smith said firefighters at the Gugulethu station have had to be deployed to other fire stations in the meantime, amid safety concerns and until the situation in the area calms down.

Smith condemned the attack, saying the relocation of staff to other stations means that firefighting efforts in Gugulethu and surrounding areas would take longer, “as there are no resources operating from the local fire station until further notice”.

The City has called on Gugulethu residents to help identify the suspects behind the attack. 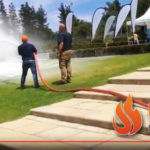 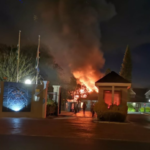