A massive weather system that threw a blanket of dust over Sydney threatened to generate more unusual conditions across New South Wales and Victoria, with homes at risk in the Hunter from a fast-moving bushfire, flights delayed due to strong winds in Sydney and freezing temperatures in the Snowy Mountains.

The Bureau of Meteorology on Friday issued a severe weather warning for damaging winds over the state’s southeast – stretching from the Victorian border up to the Hunter region.

Gusts of more than 90km/h were expected, with possible blizzards in the Alpine areas.

Flights were cancelled and delayed at Sydney airport and air quality was expected to remain poor in Sydney for another day.

Stronger-than-expected winds whipped up a fast-moving bushfire in the Hunter region, putting dozens of homes near Newcastle airport under threat.

An emergency warning was reissued on Friday morning after the blaze at Campvale flared up just after sunrise and headed towards Rookes Road in Salt Ash. 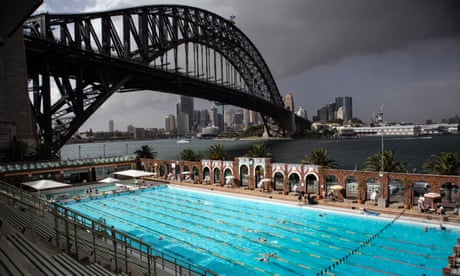 As a result, the NSW Rural Fire Service declared a total fire ban in the Hunter and increased the fire danger rating to severe.

“At the moment you’re talking about dozens of properties being directly impacted as the fire moves in around the Salt Ash area.”

Residents were told to stay put, with several roads in and out of the area closed. Access to Lemon Tree Passage and Nelson Bay was restricted, with people in those communities isolated.

“There’s a lot of concentrated effort going to stop the fire reaching the more established community areas along the [Nelson Bay] peninsula,” he said.

Four large air tankers were helping to battle the blaze – including Gaia, the 737 which was used on Thursday in a world-first.

But Fitzsimmons warned stronger winds could make it too dangerous to fly any aircraft.

“It’s going to be a difficult afternoon,” he said.

“People need to stay well informed and be ready to act accordingly.”

More than 200 firefighters spent the night battling the blaze, which had already burnt through more than 1,300 hectares.

Strong winds from a low-pressure system whipped up masses of dirt across the drought-stricken state and from South Australian lake beds before it moved towards the coast on Thursday. 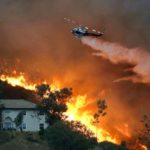